60 works by 60 artists, 60x60 offers something different every minute
60x60 is a project containing 60 works each 60 seconds in length presented continuously in an hour performance synchronized with an analog clock. 60x60 presents a slice of what is happening in the contemporary music scene by representing 60 works that are diverse in aesthetic and style. 60x60 places a call for works every year and picks (at least) 60 composer's audio works to drive the performance season that year. The 60x60 mix is then used as a base for other 60x60 projects and collaborations.

"Either a genius or crazy concept for a dance show, depending on how you look at it: 60 choreographers each create 60 seconds of movement to be performed in succession, making one hour of fast-changing, switched up dance ... dance styles range from ballet to Lindy hop to street, jazz and contemporary, and if there's one thing you can say for sure, it won't be boring."
- Time Out London -

"Expect it to stretch whatever boundaries you may not have thought you had."
-The Examiner -

60x60 Video creates a one hour video to synchronize to a 60x60 mix
60x60 Video has collaborated with video artists, experimental filmmakers, and VJ's to pair the 60 different audio compositions with video. The unique format of 60x60 video has led to many performances in interesting places where contemporary music is seldom found. 60x60 Video has been viewed in several bars and nightclubs through out the world: 60x60's first visual collaboration with the notorious experimental filmmaker Nick Zedd was screened in New York City's nightclub "The Lobby"; Shimpei Takeda's collaboration with 60x60 was seen in "Lucky Cat" a bar in Brooklyn, New York; and Toronto's nightclub, the "Supermarket," screened one of Patrick Liddell's collaboration of the 60x60 mixes. The video collaboration of 60x60 has also been presented in dynamic ways where contemporary music is almost never presented. 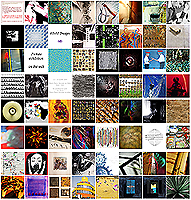 60x60 Images is a 60x60 multimedia collaboration based on fine art works that are 60 centimeters in length and 60 centimeters in width and then paired with a 60 second audio work in an art installation or performance. the project first started in Teatro Nuovo Giovanni in Udine, Italy with an idea by Vittorio Vella, and Francesca Agostinelli and Taukay Edizioni Musicali. 60x60 Images was also presented in conjunction with the opening of the 24th Annual Minumental Show Art Academy of Cincinnati. 60x60 Images is the counterpart for visual artists. Moving from the temporal nature of music to the metric scale, each artwork is created to measure 60x60 centimeters. Forty were selected from a call for works which required a difficult selection to be made from 221 works coming from 26 countries around the globe. Twenty additional artists were invited to participate in 60x60 Images in part because they have already participated in the festival. In addition, they were invited because they are artists selected for their regional profiles in the contemporary art scene. 60x60 Images uses the audio from the 60x60 Crimson Mix.

"an artistic "10," unexpected, and rewarding beyond all imagining."
- New Music Connoisseur -

60x60 Orchestra Project is to orchestra what 60x60 is to speakers.
60x60 is a project containing 60 works each 60 seconds in length presented continuously in an hour performance synchronized with an analog clock. The 60x60 mission is to present an audible slice of what is happening in the contemporary music scene by representing 60 works that are diverse in aesthetic and style. Since 2003, the music of more than 2000 contemporary composers has been featured on the Electroacoustic 60x60 project. Thousands of audience members from Berlin to Chicago to New York City to Los Angeles and points in between have experienced this innovative program which synchronizes a clock with 60 one-minute electroacoustic compositions. The 60x60 Orchestra Project brings this innovative listening experience into symphony concert halls.